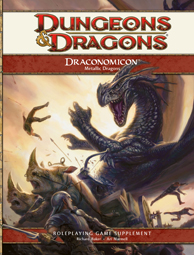 This supplement presents dragons both malevolent and benign, and gives details on each dragon’s powers, tactics, myths, lairs, servitors, and more. In addition, this book provides new information about the roles that metallic dragons fill in a D&D game. Story and campaign elements in the book give Dungeon Masters ready-to-play material that is easily incorporated into a game, including adventure hooks, quests, encounters, and pregenerated treasure hoards.

Personally, I love using metallic dragons as both benefactors and “chess players,” moving your PCs around in their own personal games. But I’m also keen on using “polymorph self” to keep their identities a complete secret until that last, crucial (and often bloody) moment.

This site uses Akismet to reduce spam. Learn how your comment data is processed.